Yeah, I keep doing this don't I? But this time it's not fanfiction, so it's sorta new... anyway. Read if you wanna, I have more 'chapters' if you like. I put chapters in inverted commas because they're more like diary entries, but, you know what I mean. I'm going to shut up now. Bye!
2nd January 2012

Okay, so, this is weird. I’ve never really been a diary person, per se. I mean, I’ve written stuff before that could pass for that sort of thing, but, you know. Only when I needed to vent. Not now though. I’m trying to keep some kind of record of what I’m doing, from the very start. So...

Basically, yesterday I decided on something. And got the perfect opportunity to carry it out last night. I’m not sure if I can even type this seriously. Not even sure if I’ll save this document, but there you go. Okay.

Well, I’ve never been one for the superhero racket. Never really bought into the whole ‘helping others with a cape and tights’ thing. I’ll be the first to say it, right now, though I know a couple of people that would disagree with me, but I really am a pretty selfish person. Sure, I help others, and I like doing it, but the whole ‘no reward’ thing? Don’t get it. I mean, don’t get me wrong, I don’t mean money or jewels or whatever. I just like recognition. Like, a pat on the back, and someone saying; ‘nice job, you did a damn good thing there.’

Okay, so maybe that sounds cheesy. And maybe, once or twice, I’ve thought about the superhero crap. But only because I like the idea of being something that other people aren’t.

So, you’ve probably figured out what I’m getting at. Kinda. Basically, I’m not buying into the whole ‘hometown hero’ stuff, but I do want to train myself. When I was younger, I even had this little metal pole thing, which I’d spin around the garden with, knocking out imaginary opponents to awesome music on my iPod. Ok, I say I was younger. I was 12. Okay, 13, maybe 14, but that’s beside the point. I’ve always been a big kid. Anyway, I’d been thinking about it, and when I passed my mum she told me she was going out that night, and wouldn’t be back until the next day (she still isn’t). So I thought, awesome! Then I thought, hmm, out at night, it’s gonna be cold, and if I’m running around like that, I’ll need something manoeuvrable. So I thought to myself, joggers and a hoodie. Then, when mum went out, I dashed upstairs to change (once my TV show had finished. I’m still a teenager). Of course, when I got to my room, I couldn’t find my joggers anywhere. Jeans? Too restricting, and too hard to explain if they got muddy or grass stained. So that kinda left me with either old school trousers, or leggings. And, because I’m stupid, I chose the leggings. And, then, because I’m too damn fashion conscious for my own good, I pulled out my new, tight, black, long sleeved, turtleneck top. And black gladiator sandals.

So there I was, head to toe in tight black clothes, all dolled up in makeup which was more than slightly pointless as I was only going out to the garden. I don’t even know what I planned to do. I did a couple laps of the garden, which didn’t take long as it’s hardly a field, and went into the shed-come-playhouse to grab this metal pole. A different one from before, I think mum threw the old one out. This one was part of a shower or something. Anyway, I started swinging it around, and came up with this sort of dance, using the pole like some kind of sword. Judging from my shadow, it actually looked pretty damn awesome. And I’ve never really been a dancer either. Anyway, I’d already come up with a music playlist to complement this insane idea, and, me being the least reliable person you could possibly ever meet, I’d left it inside. And had no intentions of going back in to get it, because I can be lazy that way. Though I did go in temporarily to attempt to carve some kind of throwing star out of a piece of slate using a Stanley knife. Gave up on that pretty quickly, though.

So anyway, spinning around with this piece of metal, obviously started out pretty awkwardly, but I got into it and actually quite enjoyed it. In fact, ever since I’d put on the outfit and the makeup, I didn’t really feel like me anymore. Not in an ‘oh damn it I’ve just contracted schizophrenia’ sort of way, more like... I was something more. More confident, more graceful, let’s face it, more damn sexy, because, pole dancing aside, skin-tight clothes on a half decent figure will do that to anyone.

And you know what? I absolutely loved it.

I wasn’t planning on any alter-ego crap that day, seriously I wasn’t. But once I’d hidden the pole away, and come inside, I realised how very different this girl was from the normal me. She deserved a different name, if nothing else. This was the girl that could stick the hell up for herself, the girl that could cross the road without flinching when a car came too close (hey, being knocked over twice will do that to ya), the girl that could do whatever the hell she put her mind to. So what should I call her?
Thinking back, most of the names were animal related. Magpie, Starling, Robyn. Yeah, mostly birds. I liked Raven for a while, but I wanted something simple. To the point. Graceful, confident, not adverse to a fight if need be. Easy.

I don’t know why, it just felt right. I loved it. And when I came back in, I got changed once more, and I was back to being Anna. A little clumsy, a little skittish, but still me. And that was cool, but I loved being Kat, and the confidence that came with her. I was glad, by that point, that I’d given her a different name to me, because it meant that she was definitive. A person in her own right. She could develop her own personality and traits, without having to take on the dodgier aspects of my own. And, if the need arose, I knew I could draw on her confidence in my life, because she was still part of me. Maybe it sounds crazy. Like asylum-worthy crazy. But hey, I’ve never really been normal. And at the moment, I’m glad of that.

So there you have it. I’ve only been doing this for a day, and already I have an alter-ego. But you know what they say.

So there you have it. I'm looking for a different name than 'Anna', though, if you can think of any. 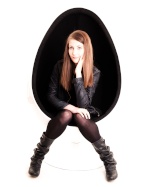 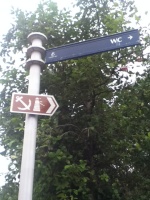 So, back again. Had an idea yesterday, but couldn’t do it until mum left the house again, which, luckily, happened this very morning. So, I changed into what I’ve decided to call my ‘Kat clothes’, went down into the garage and started picking out what I needed.

So one of the things that held me back most, back when PE lessons were compulsory, was my aim. It’s never been great. Well that’s an understatement. I remember singlehandedly getting someone ‘out’ in Rounders once, the only problem being that it wasn’t the opposing team. Hell, it wasn’t even my own team, it was a member of the team playing on the court next to ours. So yeah, definitely a weak spot. My solution? Practice makes perfect. So, I ‘acquired’ a piece of plywood that I knew would never otherwise be used, along with some nails and tacks, some wooden canes, and, by pure luck, found some ‘joining compound’ wedged between two pots of paint.

Now, the great thing about wooden stakes is that they’re pretty easy to cut through, being only about the thickness of my finger. They’ve also got flat ends, much like the nails I’d chosen from the pot in the garage (which contained hundreds of the things), so it was a relatively easy task to dab a spot of joining compound onto the nail head, and attach it to the end of the wood. And, once I had cut the stakes up into reasonable lengths, that’s exactly what I did. Whilst they were drying, I drew a quick target onto the plywood, like a bullseye.

So, then I had several makeshift ‘arrows’ and a target to aim them at. But, of course, I didn’t count on simple physics to screw me over. There’s a reason medieval people used bows to fire their arrows. Because otherwise, it doesn’t work. Arrows are just too light to be thrown. They fall down midway there. Sure, what I had would be useful hand-to-hand (why was I even thinking like that, it’s not like I was planning on fighting anyone), but they would do nothing for my aim. I looked online for stuff, like throwing stars or whatever, but it seems that eBay doesn’t have a weaponry section. Strange, that.

Now at this point, I would have given up, but at the time, I was in Kat mode, and I kept going. I tried attaching rocks to the arrows, but that just made them fly at strange angles, and they became too hard to control. I tried adding fletching to the end of one, to make it go further, and it did, but just barely nudged the board before tumbling to the ground. I tried binding a few together, which kinda worked, but wouldn’t lodge in the board like I wanted it to.

And that was about the time I had a real idea. An idea that might just work. An idea that had me thinking that maybe GCSE physics wasn’t a waste of time after all. Mass times speed equals force. If I wanted I greater force with the same speed, I needed to increase the mass.

It was pretty obvious, and I’d sort of been there with the rocks idea, but that had changed the centre of gravity too much. The real catalyst for the idea was seeing the drill. The drill with the weirdly long drill-bit, pretty much the same length as my arrows.

Oh, this was going to be good.

Stupid idea? Possibly, but the open bag of construction-grade sand in the corner was too good an opportunity to miss. It was like the universe was shouting at me to do it. So I thought, okay universe, whatever you say.
Needless to say, I still have all my fingers, or this would be a hell of a lot more difficult to type. There were a few near misses, but eventually I got the hang of it. I hollowed out my arrows, and filled them with the sand, stoppering the end with more of the joining compound.

The arrows - or maybe they were more like darts - flew perfectly, and they were easier to control than you might think. After the first few tries, not one of them missed the board, and quite a few landed in the very centre of the bullseye. It was awesome.

And now Kat has another weapon in her arsenal.


Tada! Still looking for new names, just if anyone had any ideas... meh. Anyway, hope you like!