I ran, faster than I've ever run, before or since, desperately sprinting through the darkness, my vision impaired by the blood streaming into my eyes.

I tripped, my feet catching an up-raised paving slab, and fell painfully sprawled in the alleyway. I heard the footsteps behind me slow to a walk, and finally, stop next to my prone form. Through blood covered eyes I glimpsed stiletto-booted feet, before the right boot swung into contact with my chest.

I felt something go crack in my ribcage, and breathing immediately became far harder.

"What do you want? My phone? My money?" My voice emerged as a rasp, and she laughed.

"You could have made this much easier on yourself if you had lay down and died like the rest of them... Instead you cause me some effort chasing my bleeding quarry through dingy alleyways. For that, there will have to be some punishment." Her voice modulated from amusement to anger as she spoke the last words, and her booted foot again swung into my chest, and pain blossomed in my lungs.

I coughed up a mouthful of blood. Blood was still pouring from the wound in my forehead where she had initially thrown me against the wall, after enticing me to leave the club I had met her in for a more secluded environment.

"Please....please...take whatever you want, just don't kill me." My voice this time emerged as a plea.

"That's right, beg for your life, fool." I heard the malicious smile in her voice "Of course, it doesn't change anything, but it's nice to hear someone beg and scream once in a while."

She crouched next to me, and her next words were spoken next to my face "So, are you going to scream? Or do I have to make you?"

I remember, in those moments just before my death, thinking how strange it was that after running after me, a well-conditioned young male, that she wasn't even short off breath, and neither did I feel her breath on my face as she spoke to me then.

Her hand reached down, and casually wiped the blood from my eyes. Now I got my first glimpse of her face since stepping into the alley with her, and saw nothing but cold humour.

"Well, lets see if this works..." She stared into my eyes, inches from my face, and with a hiss her eyes went black and her canines elongated out of her open mouth.

She finally had the satisfaction of hearing me scream then, before she bent just a little further, and with a parting smile, tore my throat out.

I felt my blood gurgling out of the hole in my jugular, and listened, disgusted, as the girl drank my blood, sucking it along those elongated fangs.

As my consciousness began to fade, and darkness crept along the edge of my vision, I remember looking up, and seeing the look of pleasure on her face. This girl had just killed a complete stranger in an alley, and looked like she had loved every minute of it.

Then darkness hit, and I remember no more. 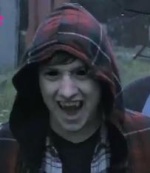 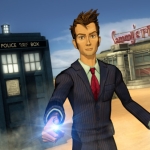 oooooooooooo carry on i want to see more PLEASE

Please carry on writing.
I Must. Have. More.